A proposition for legislative opposition to the medical justification of assisted suicide and euthanasia, based upon years of experience with hyper-medicalized assisted death in Canada

A unique Canadian experience, and a duty to forewarn

It is an unfortunate fact that Canada, since 2015, has had a much greater and more painful experience of assisted death than any other country in the English speaking world. It is therefore to be hoped that our experience may be of some use to those, of similar cultural affinity, who are currently faced with the legalization and expansion of such practices, and particularly, of some help to our immediate American neighbours.

From the Canadian experience, one may rapidly deduce that -- beyond the mere legalization of assisted death as such -- the most pernicious associated phenomenon has been the tendency to justify, to normalize, and to expand this practice as essential medical care.

The conceptual danger of accepting assisted dying as medical care.

Medical care is almost universally perceived as a desirable good. There is, in fact, an enormous volume of political opinion currently supporting the idea of medical care as a basic human right, on the same footing as food or shelter.

Therefore, from the moment that assisted dying (whether assisted suicide or euthanasia) is perceived as medical care, it becomes possible, for its promoters, to claim far-reaching rights of practice, and even, to claim assumed obligations -- of the State, of medical professionals, and of institutions -- to provide assisted dying services, and to actively disseminate information to that end; or at the very least (for individual professionals) to collaborate with, and to provide direct access to, other professionals who will.

Real consequences, as currently experienced North of the Canadian border 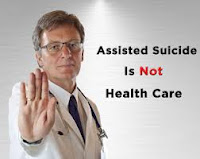 In Canada, we now have conclusive and dramatic experience to demonstrate exactly where such thinking logically leads: for of all nations, Canada stands alone in explicitly defining assisted suicide, and euthanasia, as medical care (via legislation in the Province of Quebec that has subsequently been accepted as a de facto national standard) Practical results include the following:

Clearly, all of the above innovations (currently being normalized throughout the entire Canadian medical industry), are entirely dependent upon the definition of assisted dying (ie. euthanasia) as standard (even essential) medical care. And yet there is no reason why any such definition should be admitted.

On the contrary: there are not, and never have been, agreed, objectively verifiable medical indications for the prescription of assisted dying to any particular patient (which is the first requirement of clinical medicine); the fundamental justification for all assisted dying has always been the autonomous desire of the individual patient. Nothing in the possible permission granted to medical professionals, to practice assisted dying, could possibly be construed as justifying the professional rights and obligations associated with typical medical treatment.

The institutional support for such a position

The question must be asked: Why on earth should any credence be given to the interpretation of assisted dying as benign, standard, (even essential) medical care, which has been injected by judicial and legislative action, not in response to true medical opinion, but demonstrably in opposition thereto? And how can this fictitious definition of assisted suicide and euthanasia, as "medical aid in dying" be prevented from creating the pernicious professional rights and obligations observed above?

A suggested strategy of disallowing the medical justification for assisted dying

It the present situation nothing, other than opposing assisted death as such, can be considered as important as opposing the medical justification of such practice.

Even though the historical context of these debates has ensured that assisted death (where legalized) be restricted to the actions of medical professionals only; and even if medical criteria are invoked to determine who may or may not be legally permitted to seek such assistance: there is no reason to accept the assertion that assisted death is, in fact, medically justifiable.

Therefore, it is the duty of all those who oppose these practices, to see that this pernicious connection be snipped in the bud.

One proposed method of attaining this goal is through deliberate, consistent, legislative action:

A proposed model for future legislation

The following text is intended as a first draft in the elaboration of such a general case clause, to be inserted in all existing and future assisted death legislation:

"Because assisted suicide (and euthanasia) are purportedly justified, above all, by personal choice; because (in the general case) there is no agreement on the medical legitimacy of assisted suicide, or euthanasia; because (in the particular case) there is no agreement on the objective conditions which would indicate the use of assisted suicide, or euthanasia (not as a right of choice, but as a true, objectively justified medical treatment); because, therefore, the term "medical assistance in dying" signifies only a "death facilitated or caused by medical professionals", but not a "death facilitated or caused as an objectively indicated medical procedure"; and because of the public and personal interest in limiting the propagation of suicidal suggestion: be it resolved that,