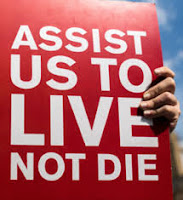 An ethics committee in the central Italian region of Marche has approved the first assisted suicide death, a man with quadriplegia known as Mario.

I am particularly concerned that the Italian assisted suicide court decisions all concern people with disabilities.

Italian court decisions appear to suggest that certain lives are not worth living.
Alex Schadenberg at 2:48 PM
Share