Euthanasia and assisted suicide continue to be defeated. 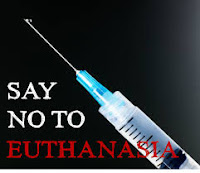 Many media outlets are promoting the message that euthanasia and assisted suicide are being legalized everywhere and yet the reality proves that the opposite is true.
On Tuesday May 23 the Maine House defeated assisted suicide bill L.D. 347 in a bipartisan 85-61 vote and on Wednesday May 24 the Tasmanian parliament defeated euthanasia bill (Voluntary Assisted Dying Bill) by a vote of 16-8.

The Maine Press Herald reported that:


The bipartisan 85-61 vote against the bill followed lengthy and oftentimes emotional debate among lawmakers sharing personal stories of watching loved ones battle terminal diseases. The so-called “death with dignity” bill had passed the Maine Senate by a single vote last week but faced a potential veto from Gov. Paul LePage even if it had passed the House.

“My conscience tells me that this is the wrong direction for a variety of reasons,” said Rep. Gay Grant, D-Gardiner. “This is not a partisan issue. It is a human issue.”

Paul Russell, the Director of Hope Australia reported that:


In debate, Michael Ferguson MP criticised the euphemistic language of the bill, arguing that such a grave matter demands clarity:

“We all agree it is a matter of life and death and if we cannot strip away the euphemistic language and discuss the reality of the matter then it will not be an honest debate and the public interest would not be served.

“I ask those promoting this bill to be truly frank and honest in their descriptions, and for those listening to the debate today, if or when you hear those euphemisms, you need to remind yourself that the real words, however distasteful they are, are mercy killing and assisted suicide by a doctor.”

Many people will say, but Alex, that is only two jurisdictions. The fact is that in 2017 assisted suicide bills have been stopped or defeated in Hawaii, Utah, New Mexico, Nebraska, Minnesota, and Maryland while in several other states, assisted suicide bills were introduced but lacked support to even be debated.

This is an issue that is literally about life and death.

Legalizing euthanasia or assisted suicide gives physicians the right in law to kill their patients.
Alex Schadenberg at 4:01 PM
Share