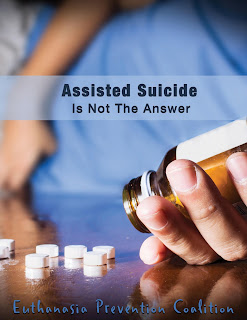 Bill C-14, An Act to amend the Criminal Code and to make related amendments to other Acts (medical assistance in dying) was tabled today in the House of Commons.

Bill C-14 appears more restrictive in comparison to the radical recommendations from the government assisted dying committee. The bill does not extend euthanasia to mature minors, to people with dementia, or to people who seek death by lethal injection for psychological reasons alone. The bill appears to require the person to have a terminal condition and it appears to require a 15 day waiting period.

In reality Bill C-14 provides legal immunity to anyone, who kills another, while the bill fails to provide effective oversight of the law or conscience rights for healthcare professionals.

There are significant problems with the design of Bill C-14.

1. Bill C-14 does not provide effective oversight of the law. The bill requires approval for euthanasia or assisted suicide by two independent physicians or nurse practitioners, without requiring before the death oversight from an independent third-party (judge or committee). The bill permits the doctor or nurse practitioners that approve the act to also do the act and then also report the act. There is no effective oversight when the same person approves the injection, does the injection and then reports the injection.

It is unbelievable that legal immunity is provided to anyone. This bill provides the perfect cover for acts of murder.

3. The bill does not limit euthanasia and assisted suicide to people who are terminally ill. The bill defines terminal as: their natural death has become reasonably foreseeable, taking into account all of their medical circumstances, without a prognosis necessarily having been made as to the specific length of time that they have remaining.

What does it mean that natural death has become reasonably foreseeable? How will that be determined if a prognosis is not necessary? This section of the bill provides an illusion of compromise.

The bill requires a medical or nurse practitioner to: be satisfied that the request was signed and dated by the person — or by another person under subsection (4). To “be satisfied” is a very low standard.

Bill C-14 is a Trojan horse that falsely claims to provide clear and effective guidelines.

5. The bill does not provide conscience protection for medical or nurse practitioners. Medical professionals who consider killing patients as the antithesis to care are not given conscience protection in Bill C-14. Section 241.31 requires medical and nurse practitioners to be involved in the act by requiring them to send requests for euthanasia or assisted suicide to a “designated recipient” or the Minister of Health.

Bill C-14 does not provide effective oversight of the law, it is not a harm reduction model, nor does it provide safe spaces for people who are particularly opposed to being killed by lethal injection and it does not provide conscience protection for medical professionals who oppose killing patients. This bill provides the perfect cover for acts of murder by enabling “anyone” to directly participate in the act

This bill is particularly dangerous for Canadians in their time of need.

EPC is a national organization of citizens and groups who support caring measures and oppose euthanasia and assisted suicide. EPC has more than 25,000 supporters.
Alex Schadenberg at 1:39 PM
Share